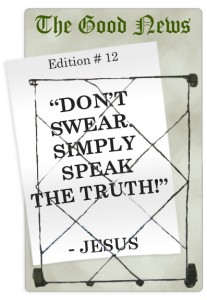 Matthew 5:33
“Again, you have heard that it was said to the people long ago, ‘Do not break your oath, but keep the oaths you have made to the Lord.’
34 But I tell you, Do not swear at all: either by heaven, because it is God’s throne;
35 or by the earth, because it is his footstool; or by Jerusalem, because it is the city of the Great King.
36 and do not swear by your head, for you cannot make even one hair white or black.
37 Simply let your ‘Yes’ be ‘Yes’ and your ‘No’, ‘No’; anything beyond this comes from the evil one.”

“The truth, the whole truth, and nothing but the truth!”

Obeying the law and not swearing falsely is insufficient. The delicate fabric of our society depends on trust and telling the truth. Our society would break down without a general acceptance of what is honest, fair and truthful. We know instinctively that ‘life cannot be lived arbitrarily’.

But how do we know what is true? As Thomas Aquinas said ‘It is human to know the truth and to pursue it, to strengthen the daily threads of integrity’. We know that there is consolation in doing what is right and true. Our conscience guides us.

We do not often tell untruths. But there are other temptations. One is to remain silent in the face of untruth, injustice and unfairness. There is also a more recent development and that is to allow truth to be clouded by abuse and distortion of the language. We call it ‘spin’. So the rejection of asylum seekers is called ‘border protection’. The destruction of Fallujah is called the ‘liberation’ of the city.*

John Menadue was Secretary of the Prime Minister’s Department under both Whitlam and Fraser, and has held many other senior positions in Australian public life as business, diplomat and public servant.