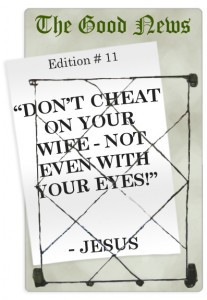 “Look away now!”
King David was at the height of his powers. The shepherd boy who felled Goliath, the popular war-hero and writer  of psalms, was in full control of his kingdom. But, like some modern world leaders, he failed to control his eyes, with disastrous results!  One evening, from the roof of his palace, “he saw a woman bathing. The woman was very beautiful, and David sent someone to find out about her.” His choice was to keep looking or to look away. His decision led to his affair with Bathsheba, the wife of Uriah. There followed an unplanned pregnancy, a failed cover-up attempt, an arranged death-in-battle, and the death of a child. (The conclusion of this dramatic story is told in 2 Samuel chapters 11 & 12. and Psalm 51)

Jesus says it is not enough to be technically faithful. Infidelity starts in the heart, and is fed by the eyes. The habits of daily life set up the default patterns for the critical turning points of life. We must take drastic action – “whatever it takes” – to control what we watch.

In this age of pervasive sexual imagery, and instant access to seductive visual content, Jesus’ message is more relevant than ever! Today, the story of David is played out over and over again as men and women in every walk of life make ship-wreck of their personal and public lives, their families and careers, by failing to control their eyes.

Job is the model of a good man who suffered tragedy on tragedy, and wrestled with the meaning of suffering. He took an audit of his life. (Job chapter 31) First on his check list was how he looked at women! “I made a solemn pact with myself never to undress a girl with my eyes.” (Job 31:1 The Message translation.)