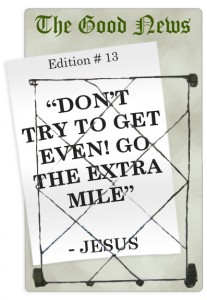 Matthew 5:38
“You have heard that it was said, ‘Eye for eye, and tooth for tooth.’
39 But I tell you, do not resist an evil person. If someone strikes you on the right cheek, turn to him the other also.
40 If anyone wants to sue you and take your tunic, let him have your cloak as well.
41 If someone forces you to go one mile, go with him two miles.
42 Give to the one who asks you, and do not turn away from the one who wants to borrow from you.”

A friend of mine was at a football game alone and came back from the toilet to find that the scarf he had left on his seat to reserve it had been thrown on the ground and someone else was sitting in his seat. When he told the man in his seat that he had been sitting there, the guy abused him and told him to find another seat. My friend went to the bar, bought a beer, returned to the seat, silently gave it to the man who had stolen his seat, and then walked away.

Out of context, it is easy to see this passage as a command to be passive in the face of violence and exploitation, but passivity is the opposite of what Jesus is teaching here. This passage is one of a series of examples Jesus gives in Matthew 5 of radically distinctive behaviour that will point people to the God of love (Matthew 5:16).

It is important to notice that these are commands to action. ‘Turn the other cheek…Hand over your coat…Go the extra mile.’ This is not submitting to violence and exploitation, but taking back the initiative, and overturning violence with love. When unjust demands are made of us by those more powerful, passivity involves doing exactly what is demanded and no more. To actually do more than is demanded instead is to assert your own autonomy and dignity in a most surprising and powerful way, a way that flies in the face of the usual dynamics of power and resistance.

Mahatma Gandhi and Martin Luther King Jr. showed the transformative power of these principles. How might they transform the contexts we find ourselves in?