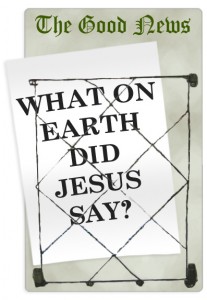 Jesus of Nazareth! His life is so significant, it divides our entire record of human history into two eras; before and after Christ.

Jesus spent three years as an itinerant Jewish teacher before being executed in Jerusalem at age 33. He preached in synagogues and in the open air. He trained his disciples, and performed amazing deeds. He lived out the values he preached, pursued a lifestyle of simplicity, and associated with the marginalised and socially unacceptable. Without formal education or wealth, without social or political connections, and without an army, he spoke with such moral authority that crowds were attracted to him. He confronted the hypocrisy of the religious teachers. His increasing popularity and influence threatened the stability of their uneasy alliance with the Roman authorities in Jerusalem. He was convicted of blasphemy by a Jewish court, and condemned to death by crucifixion by the Roman Governor, Pontius Pilate. After his death his disciples testified that he had come back to life.

In the next three hundred years, his message spread throughout the Roman Empire, and beyond. Without military force, and in spite of opposition and waves of official persecution, communities of Jesus-followers sprang up from Egypt to Armenia, from Britain to India. As they met together, their lifestyle challenged local culture. Jew and Gentile, male and female, rich and poor, slave and free, met together as brothers and sisters to celebrate Communion, and learn Jesus’ teaching. They cared for widows, orphans, the poor and strangers. They rescued abandoned babies, and, during various epidemics such as small-pox and the plague, they risked their own lives to nurse the infected.

It is not too much to suggest that Jesus remains the single most influential figure in human history.

Today many millions around the world follow him and his teaching. Francis of Assisi, and Mother Theresa, Tolstoy and Dostoyevsky, Mahatma Gandhi and Martin Luther King Jnr, Nelson Mandela and Desmond Tutu were all profoundly influenced by him. Many of Jesus’ sayings, and events and people from his life, have become part of our every-day language.  (For example; the Good Samaritan, the prodigal son, “go the extra mile”, “greater love”, “wolf in sheep’s clothing,” Lazarus, Judas, and Doubting Thomas.)

In the 2021 Australian census, 44% of Australians identified as being Christian. The principles derived from his teaching underlie our society, institutions and culture. Our social service, health and education sectors would collapse without the massive contribution of Christian based organisations.

But what was his message? What was he on about? Here is an opportunity to consider his message seriously for yourself.

Today, it is easy to study the actual words of Jesus translated into modern English, or in any other language. His words are down-to-earth, and speak to the issues of today.

For people searching for the principles for a life worth living, Jesus promises that his teaching provides a foundation for life, a basis for surviving life’s crises. (“Build on the rock!”)

For those who have become cynical about Christian Churches, communities and individuals, and who despair of organised Christianity, with its hierarchies, traditions, divisions and politics, the original instructions of Jesus himself,  the founder of Christianity, are available to be studied. Jesus confronted the religious teachers of his generation, challenging them to return to “the more important things,” of justice, mercy and integrity!  (The more important things.)

For those who have been abused by Christian leaders, or communities, Jesus speaks clearly. He reserves his fiercest condemnation for those who cause harm to children. (“Better off drowned!”)

Those who feel they have failed as followers of Jesus may find comfort in his gentle words of restoration, as he reinstated Peter, the disciple who had dramatically denied his leader. (“Follow me!”)

To those who feel they can no longer accept the things they were taught, and perhaps once believed, may I share the reasons why I am still a Christian? (Why!)

Rationalists question the reality of supernatural events. They can relate to the story of Doubting Thomas, who refused to accept the reports of Jesus’ resurrection without evidence for himself. Their challenge is to find a credible explanation for the change in Thomas, that caused him to invest the last years of his life taking the message of Jesus to India, and to account for the millions of “Thomas Christians” today who worship in Mar Thoma churches in Kerala State in India, and in cities around the world. (Faith, reason and evidence.)

Seekers of enlightenment can investigate this bold announcement of Jesus; “I am the Light of the World. Whoever follows me will never walk in darkness, but will have the light of life.” (John 8:12)

Muslims honour Jesus as a great prophet. They strive to live in submission to the will of God, pray to be guided to the right path, and hope to be accepted on the Day of Judgement. They can feel at liberty to take the instructions of Jesus seriously, and under obligation to do so. Jesus speaks in the Qur’an, pointing to his miraculous signs as confirmation of his prophetic authority, and giving the clear command, “Fear God, and obey me!” (“A great prophet.”)

Stress? Guilt? Shame? Jesus offers an invitation to those who are worn out carrying a heavy load, and offers rest. (“Burdened?”)  Like a manager, or coach, he invites us to sign on to his authority, and walk in step with him; – “take my yoke.” He offers gentle leadership, and rest for the soul. (Yoke.)

Here is an introduction to the message of Jesus; an overview of his public teaching, as recorded by Matthew, presented in the form of 52 headlines, with comments by a wide range of Australian Christians.

His message is for everyone!