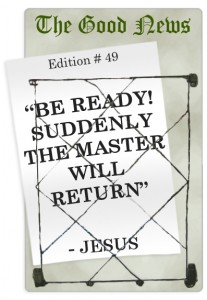 I remember watching a popular Australian television “Tonight Show” one evening. Someone, somewhere, had predicted that the world would come to an end that very day and had attracted enough publicity to cause the program in question to send a well-known comedian into Melbourne’s streets quizzing random citizens on their preparations for this catastrophe.

Talk of the end of the world or the return of Jesus to planet earth is often treated as a joke, the special concern of weirdos and charlatans. But Jesus himself said that he would come back and take all who follow him to be with him forever. Since Jesus proved his claim to be the Son of God by rising from the dead, his promises need to be taken seriously. His return, “the second coming”, is as certain as the first Christmas, and the first Easter!

Equally certain is the fact that no-one but God knows when it will be. The predictions of self-styled prophets are futile and dangerous: futile, because Jesus used the image of a burglar (hardly likely to pre-announce a visit to your premises!) to picture the unknowable-ness of the timing; dangerous, because they provide ammunition for those who treat the idea with disdain.

What is a sensible response? We must be ready. Jesus could come back at any time, even in the middle of a comedian’s vox-pop interview!