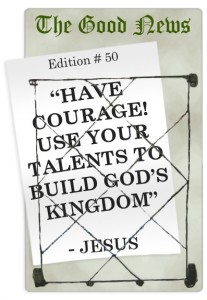 Matthew 25:14
“Again, it will be like a man going on a journey, who called his servants and entrusted his property to them.
15 To one he gave five talents of money, to another two talents, and to another one talent, each according to his ability. Then he went on his journey.
16 “The man who received the five talents went at once and put his money to work and gained five more.
17 So also, the one with the two talents gained two more.
18 But the man who had received the one talent went off, dug a hole in the ground, and hid his master’s money.
19 “After a long time the master of those servants returned and settled accounts with them. …

To me this story Jesus told is about accountability – a subject much discussed these days.

We are all accountable to use the gifts and abilities, the resources that God has given us, and to invest them in action so that they will build God’s kingdom.

Despite the different number of talents with which the three men were entrusted, they each had the same challenge – to go and do something with them, wisely and creatively.

Two of the men were commended for using their talents well, but the spotlight falls on the third man who did nothing with his one talent. He was condemned, not because he only had one talent, but because – through lack of faith, and lack of effort and vision – he just cautiously hid it under the ground.

Accept the challenge. Be positive. Use your gifts, be they few or many, and you’ll be surprised what good will result from your faith in action.

General Eva Burrows was the world leader of The Salvation Army, 1986 to 1993.