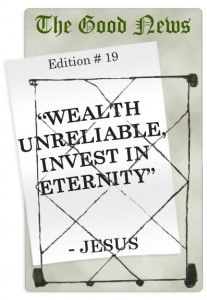 Matthew 6:19
“Do not store up for yourselves treasures on earth, where moth and rust destroy, and where thieves break in and steal.
20 But store up for yourselves treasures in heaven, where moth and rust do not destroy and where thieves do not break in and steal.
21 For where your treasure is, there your heart will be also.”

Focus on the things that count!

There was a sense of anticipation as Trevor drove his new Porsche through the suburbs, towards the hills. He could see the sun’s beautiful reflection on the immaculate ebony bonnet of the 911. He basked in complete delight as at the wood grain finish on the inner panels of the door, the car smelt deliciously new, he could feel the leather seat caressing his body and the silence of the engine almost made his ears tingle. All of his senses were consciously engaged for one of the few times in his life and quite frankly he loved it.

He was ascending one of the big hills by this time and smoothly moving through the tight corners, when all of a sudden a truck came hurtling around the corner. The driver was struggling to control his load down the hill. Trevor panicked, swerved, lost control of the car, was flung out of the driver’s side window and the car crashed over the steep cliff and crashed 200 meters below.

Trevor, recovering quickly, rushed to the cliff’s edge and began moaning, “My new car! My new car! I can’t believe my new car is gone!” A driver who had witnessed the accident rushed over and pointed out to Trevor that his left arm had actually been severed from his shoulder in the accident.

Trevor responded with a scream of despair followed by more lamented moaning, “My Rolex! My Rolex!”

It would seem ridiculous that a person who has just had a brush with death would be so concerned about material possessions.

Every day, however, people make choices that place material possessions – cars, houses, clothes, technology, money, career – ahead of things we all know are more important and last beyond death – relationships with others and with God.

In Matthew 6, Jesus tells us to stop placing so much emphasis on things that don’t last – wealth, technology, career, cars – and focus on things that matter – relationship with God (prayer, reflection, delayed gratification) and relationships with others (love, contentment, generosity, selflessness) – things that last for eternity. Be happy with what you have. Give generously to others. See things from God’s perspective and enjoy the life you have.

Brad Buchanan works in the magazine publishing industry, and is a former church pastor.