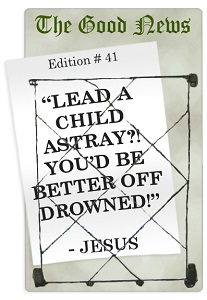 Matthew 18:6
“But if anyone causes one of these little ones who believe in me to sin, it would be better for him to have a large millstone hung around his neck and to be drowned in the depths of the sea.
7 Woe to the world because of the things that cause people to sin! Such things must come, but woe to the man through whom they come! …

10 “See that you do not look down on one of these little ones. For I tell you that their angels in heaven always see the face of my Father in heaven.”

“How we treat children matters to God”

Jesus had used a small child, (who knows, it may even have been a female), to teach his disciples a basic lesson about the Kingdom of God. The relatively insignificant social status of a child challenged pride and commended humility. The child then became a vehicle for designating his followers whether young or old. To harm one of “these little ones” was to court the judgement of God.

The Law of the Kingdom of God is love; love towards God and love towards others. To offend against that Law in any form is to incur God’s just judgement. To practice harm to any, especially children, – for in the Bible they are recognised as belonging to that group of vulnerable people who deserve particular care and protection – is to offend grievously against the One who has a special regard for the vulnerable. In fact, it is, as Jesus said, better to be plunged heavily weighted into the sea, than to face the justice of the God who is Love, for being cruel to a child.

Archbishop Harry Goodhew was Anglican Archbishop of Sydney from 1993 to 2001.