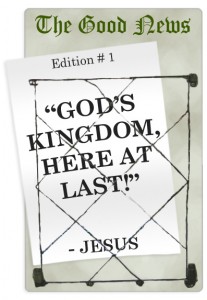 Matthew 4:17
From that time on, Jesus began to preach, “Repent, for the kingdom of heaven is near!”

Mark 1:14
After John was put in prison, Jesus went into Galilee, proclaiming the good news of God.
15 “The time has come,” he said. “The kingdom of God is near! Repent, and believe the good news!”

The evil in the world seems overwhelming. Terrorism, war, cruelty, inequality, injustice, and corruption cause us fear and uncertainty. Bushfires, floods, earthquakes and tsunamis confront us with the uncertainty of life, and raise hard questions about God and the natural world. We are tempted to ask: “Is God in charge in the world?” (This question might boomerang! After all, “Is God in charge in my life?”)

Jesus began his preaching career with the bold announcement, “God’s kingdom is arriving!” The Jews were looking for the promised Messiah to liberate them from the Roman occupation, and bring in an era of peace and prosperity. But the Kingdom Jesus talked about was not a political or military solution to overthrowing Roman rule.

He taught about individuals living changed lives with God in charge; men and women experiencing the reign of God in their own hearts, free from fear and guilt, and the control of evil. His teaching and his own example spelled out the detail of what such lives would be like.