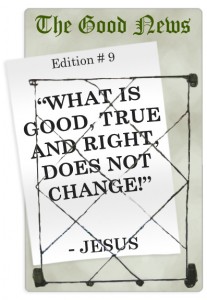 Matthew 5:17
“Do not think that I have come to abolish the Law or the Prophets; I have not come to abolish them but to fulfill them.
18 I tell you the truth, until heaven and earth disappear, not the smallest letter, not the least stroke of a pen, will by any means disappear from the Law until everything is accomplished.
19 Anyone who breaks one of the least of these commandments and teaches others to do the same will be called least in the kingdom of heaven. But whoever practices and teaches these commands will be called great in the kingdom of heaven.”

At first sight, this is a puzzling thing for Jesus to say. Didn’t he come to introduce a new way of being friends with God- a way that has to do with faith, and not with obeying rules? Yes, he did. But the rules were never meaningless. They were based on the character and purposes of God, which do not change.

Jesus fulfils “the Law and the Prophets” (the Old Testament, or Jewish Bible) by giving full meaning to them. Some of the rules had to do with animal sacrifices for sin- Jesus fulfilled those by his own sacrificial death on the cross, which meant  all further sacrifices are unnecessary. Rules about which foods could be eaten had to do with Israel being distinct from other nations, but it was always God’s plan to bring those nations back into His people.  Jesus achieves that, too, so those rules are no longer necessary.

But there were other rules about how we live which are based on God’s character, which is faithful, just and loving. God wants us to be like this, too. And we do best as individuals and as a community when we live like this. That has not changed.

Denise Cooper-Clarke is a medical doctor and ethicist.