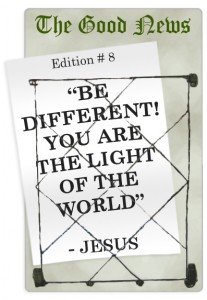 Matthew 5:13
“You are the salt of the world. But if the salt loses its saltiness, how can it be made salty again? It is no longer good for anything, except to be thrown out and trampled by men.
14 You are the light of the world. A city on a hill cannot be hidden.
15 Neither do people light a lamp and put it under a bowl. Instead they put it on its stand, and it gives light to everyone in the house.
16 In the same way, let your light shine before men, that they may see your good deeds and praise your Father in heaven.”

Light of the World

If we take the words of Jesus literally or metaphorically, this directive is still black and white, crystal clear.
He means that his followers are to be obvious, as obvious as an Essendon jersey in a Collingwood club house! But more than that. They are the light of the world that has no other light. None at all! They are the hope of the world, which is in darkness or at best has fake or fading lights. Impossible or a call to lift their game? Jesus didn’t play tricks. He said both he and his followers are the light of the world.Maybe we can accept him as the light in the darkness; – given how he stacks up with his life and resurrection.

But his followers? Ask any young adult suffering depression at the hands of an abusing priest or Sunday School teacher how enlightening Jesus followers are! So what did he have in mind? Just what he said. It is not impossible to be the world’s light if a person follows him. It’s just that he was prepared to let his perfection be distorted while he risked his plan actually working through his less than perfect followers. And over and over we see that where good souls have followed him with honesty, faith and perseverance they have lighted the darkness.

Peter Breen is the co-founder of Jugglers Art Space, a community arts organisation in Brisbane.

“You in your small corner, and I in mine!”