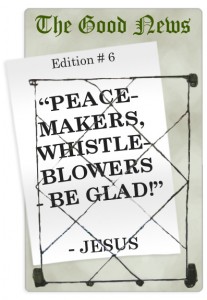 Matthew 5:9
“Blessed are the peacemakers,
for they will be called sons of God.
10″Blessed are those who are persecuted
because of righteousness,
for theirs is the kingdom of heaven.”

“Blessed are the Peace Makers”

These words often remind me of an overnight tent protest I got involved with at the height of the Cold War in 1983. A few local friends, from our Mornington People for Nuclear Disarmament, had gathered to non-violently resist the small but definite Australian support for the American Star Wars Supersonic Ray-gun technology, being partly developed at the Maribyrnong Weapons Facility near number 57 tram stop in West Melbourne. After a freezing night around an oil-drum fire drinking soup from passers-by, we woke at 5am to greet the munitions workers with a smile and a brochure. There were two banners near our tents on the cyclone fence; one a gorgeous rainbow banner declaring “Blessed are the Peacemakers”, – the other was a large banner stating Albert Einstein’s reaction to the Hiroshima bombing, and his part in providing the theory; “If I’d known, I’d have been a locksmith!”

I still enjoy walking the streets for world peace today.

David Price is a retired general surgeon with a passion for issues of peace and the environment.

The whistle blower of our day is one of the people Jesus commends in the last of the eight beatitudes. The person who exposes dishonest practices from within any organization will encounter the opposition of those whose power and corrupt advantage is being challenged. The whistle-blower must expect to meet not praise and credit, but isolation, intimidation, abuse, ridicule, slander, blackmail, official sanction, prolonged and financially crippling legal proceedings and even violence and death. Jesus encourages those whose stand against injustice leads to persecution. They will be vindicated. Jesus says they will have a place in God’s kingdom.