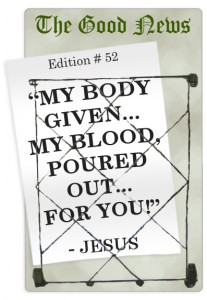 Matthew 20:28
… the Son of Man did not come to be served, but to serve and to give his life as a ransom for many.”

Matthew 26:19
So the disciples did as Jesus had directed them and prepared the Passover. ..
26While they were eating, Jesus took the bread, gave thanks and broke it, and gave it to his disciples, saying, “Take and eat; this is my body.” 27Then he took the cup, gave thanks and offered to them, saying, “Drink from it, all of you. 28This is my blood of the covenant, which is poured out for many for the forgiveness of sins. 29I tell you, I will not drink of this fruit of the vine from now on until that day when I drink it anew with you in my Father’s kingdom.”

Luke 22:19
And he took bread, gave thanks and broke it, and gave it to them, saying, “This is my body given for you; do this in remembrance of me.”
20In the same way, after the supper he took the cup, saying, “This cup is the new covenant in my blood, which is poured out for you.”

Why did Jesus die?

Jesus, as he was about to face his own betrayal, humiliation and agonising death, shared the last supper with his twelve disciples. As The Teacher, he led his followers through the traditional Passover meal celebrated every Easter, marking God’s liberation of the Hebrew people, their Exodus from slavery in Egypt, and the beginning of the Jewish nation under Moses. As he shared the bread and “the cup of blessing” he gave these symbols a new meaning, and initiated the Christian rite of Holy Communion (Eucharist.) In doing so, he taught his disciples his own view of the meaning of his death.

Echoing the image of “the suffering servant” in Isaiah’s prophecy, he portrayed his death as finalising the “new deal” (covenant or contract) between God and humanity by which we are offered forgiveness. “My life I am giving for you!”

As Isaiah predicted; “Surely he took up our infirmities and carried our sorrows, yet we considered him stricken by God, smitten by him and afflicted. But he was pierced for our transgressions, he was crushed for our iniquities; the punishment that brought us peace was upon him, and by his wounds we are healed. We all, like sheep, have gone astray, each of us has turned to his own way, and the LORD has laid on him the iniquity of us all.” (Isaiah ch 53)