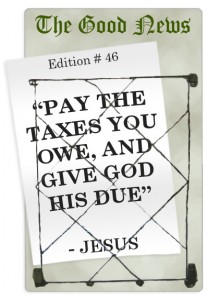 Matthew 22:15
Then the Pharisees went out and laid plans to trap him in his words.
16 They sent their disciples to him along with the Herodians. “Teacher,” they said, “we know that you are a man of integrity and that you teach the way of God in accordance with the truth. You aren’t swayed by men, because you pay no attention to who they are.
17 Tell us then, what is your opinion? Is it right to pay taxes to Caesar or not?”
18 But Jesus, knowing their evil intent, said, “You hypocrites, why are you trying to trap me?
19 Show me the coin used for paying the tax.” They brought him a denarius,
20 and he asked them, “Whose portrait is this? And whose inscription?”
21 “Caesar’s,” they replied. Then he said to them, “Give to Caesar what is Caesar’s, and to God what is God’s.”
22 When they heard this, they were amazed. So they left him and went away.

The teaching of Jesus is timeless in that he lays down principles which never go out of date. In this verse he lays down an important principle.  Every Christian has a double citizenship, he is a citizen of the country he lives in and he is also a citizen of heaven.  There are matters of religion and of principle in which the responsibility of the Christian is to God.

For most people these citizenships will never clash and normally they do not need to.

However as a Christian Parliamentarian I was occasionally torn between my faith and the views of my political party.  I always felt that it is an outworking of my faith to be concerned with issues of social justice.    Every man, woman, boy or girl is equally important, extremely valuable and precious in God’s sight.  Jesus Christ had divine love for everyone regardless of their race, gender or social standing.  One of my strong beliefs is that I was in Parliament to have a voice for those who have no voice for themselves, to use any power that I may have to help those who are powerless.

This was illustrated by my stand for those in detention centres.  As part of my work on the Human Rights Committee I visited detention centres around the country.  I talked to many who were held in those centres and they were filled with despair.  Often fleeing because of their beliefs and because they were in danger in their own country, they were desperate only to find they were imprisoned in this country.

I stood up to my leader along with three other Parliamentarians to improve conditions for these people.  It was not necessarily a popular stand, but when I thought about the life of Jesus, I realized that every individual was extremely important to him.

There were many other issues in Parliament which I worked on during my time, such as sex trafficking, prison reform, the amount of foreign aid given to other countries; not necessarily popular political issues but important to me as I worked out how to “render unto Caesar the things that are Caesar’s and render unto God the things that are God’s’ in my work in the Federal Parliament.

Bruce Baird has served as a Liberal Member of Parliament in NSW and Canberra.