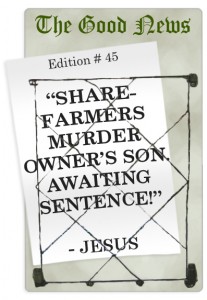 Matthew 21:33
“Listen to another parable. There was a landowner who planted a vineyard. He put a wall around it, dug a wine press in it, and built a watchtower. Then he rented the vineyard to some farmers and went away on a journey.
34 When the harvest time approached, he sent his servants to the tenants to collect his fruit.
35 The tenants seized his servants; they beat one, killed another, and stoned a third.
36 Then he sent other servants to them, more than the first time, and the tenants treated them the same way.
37 Last of all he sent his son to them. ‘They will respect my son,’ he said.
38 But when the tenants saw the son, they said to each other, ‘This is the heir. Come, let’s kill him and take his inheritance!’
39 So they took him and threw him out of the vineyard, and killed him.
40 Therefore, when the owner of the vineyard comes, what will he do to those tenants?”

“I handed my assignment in on time. Janet was three days late, but she got better marks than I did. It’s not fair!’

‘He killed an innocent person with his dangerous driving, and all he gets is a suspended sentence. It’s not fair!’

‘A failed CEO gets a golden handshake of millions of dollars, but a factory worker loses his entitlement. It’s not fair!”

‘It’s not fair’; the universal cry of those who feel that they, or others, have suffered an injustice. We enjoy detective stories partly because of our inherent sense of justice. The criminal ought to serve his time. It’s only fair to those who do keep the rules.

Jesus’ listeners agreed when he told them the story about a vineyard owner and his tenants. Their sense of justice told them what the consequences ought to be – after all, the tenants had more than enough chances. And to murder the owner’s son! But then they realised that they were the tenants – God’s tenants.