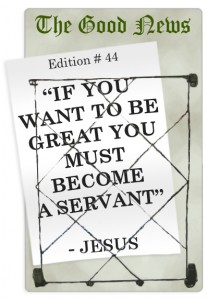 Matthew 20:25
Jesus called them together and said, “You know that the rulers of the Gentiles lord it over them, and their high officials exercise authority over them.
26 Not so with you. Instead, whoever wants to become great among you must be your servant,
27 and whoever wants to be first must be your slave –
28 just as the Son of Man did not come to be served, but to serve and to give his life as a ransom for many.”

I was brought up to be ‘a great man of God’. As a Baptist, I had the opportunity to respond to an appeal at the end of every Sunday night’s service to go forward and be prayed for at the front of the church. And the prayer people always prayed for me was that I’d be ‘a great man of God’. At seventeen I decided I wanted to be a missionary like William Carey, our most famous Baptist missionary, whose motto was ‘attempt great things for God, expect great things from God’. At twenty I went to India, like Carey did, hoping that sooner or later I’d become a ‘great man of God’.

After twenty years of trying I could see it wasn’t happening for me. So I cried out to God, asking him to tell me about the great plans he had for me that would be revealed in the fullness of time. And I remember to this day, he said to me: ‘Dave, I have no great plans for you. None at all. I don’t want you to be – or even aspire to be – “a great man of God”. I simply want you to do as many little things with lots of love over the long haul as you can do. I know that doesn’t sound great. It’s not great. But it’s good. I don’t need more great people, I need more good people. Okay?’

Dave Andrews is passionate about radical spirituality, incarnational community and the dynamics of personal and social transformation.