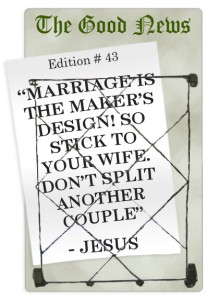 Matthew 19:3
Some Pharisees came to him to test him. They asked, “Is it lawful for a man to divorce his wife for any and every reason?”
4 “Haven’t you read,” he replied, “that at the beginning the Creator ‘made them male and female’,
5 and said, ‘For this reason a man will leave his father and mother and be united with his wife, and the two will become one flesh’?
6 So they are no longer two, but one. Therefore, what God has joined together, let man not separate.”
7“Why then,” they asked, “did Moses command that a man give his wife a certificate of divorce and send her away’?”
8 Jesus replied, “Moses permitted you to divorce your wives because your hearts were hard. But it was not this way from the beginning.
9 I tell you that anyone who divorces his wife, except for marital unfaithfulness, and marries another woman commits adultery.”
10 The disciples said to him, “If this is the situation between a husband and wife, it is better not to marry.”
11 Jesus replied, “Not everyone can accept this word, but only those to whom it has been given.
12 For some men are eunuchs because they are born that way; others are made that way by men; and others have renounced marriage because of the kingdom of heaven. The one who can accept this should accept it.”

Jesus was challenged to debate the sexual issue of his day; Divorce.

Today the issue of homosexuality and the Church is as big as – and probably more complex than – any controversy faced by Christians in 2000 years.  To complicate matters for the faithful, Western countries seem to be moving inexorably towards legitimizing gay marriages. The issue of ordaining Church leaders who are practising homosexuals is causing deep division across major sections of the Church around the world.

Christian liberals and conservatives are united in proscribing some expressions of sexuality: promiscuity, prostitution, incest, pornography, paedophilia, predatory sexual behaviour, and sadomasochism (all of which may be heterosexual and homosexual), adultery, acts of abusive violence, rape, and female circumcision.

Conservatives affirm the Church’s traditional understanding of human sexuality: Holy Scripture nowhere condones homosexual practice; a few passages of Hebrew Scripture and of letters of Paul explicitly forbid homosexual acts; marriage – the joining together of a man and a woman – is the only appropriate setting for genital sexual intimacy; the norm for singleness, as for marriage, is chastity; for ‘singles’ that means abstinence.
Liberals believe homosexuality is not an intrinsically disordered condition (‘against nature’); the Bible has nothing to say about homosexuality as an orientation; homosexual relationships are OK if they’re intended to be life-long and characterized by fidelity, monogamy, mutual affection, respect and love.

There’s an interesting story in John Chapter 8. The religious police brought an adulterous woman to Jesus. He said ‘I do not condemn you’ (an astonishing statement at that time, which perplexed many early Church fathers) before he said ‘Go and sin no more.’ You’ll meet conservatives who only remember the last injunction, and liberals who know only those earlier loving words. How easy to submit to only part of what Jesus said!  In our quest to follow Jesus we should put the two together – in his order.

Rowland Croucher is a Baptist pastor, counsellor and founder of John Mark Ministries.