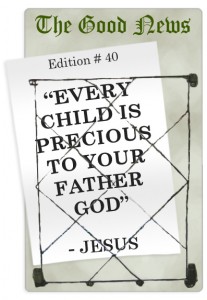 In 2002, I boarded a little plane and flew into Afghanistan to work with a child-focused aid organisation called War Child. I will never forget the year I had there, for a multitude of reasons. But the moments that are etched most into my memory and my soul, are the times that I spent with the Afghan children.

In a country scarred so deeply by so much war, poverty and tragedy, it amazed me sometimes how anyone could feel any happiness at all. Yet, somehow… most of the children I came across, were filled with a great resilience and an abundance of joy. Even when living in filthy, mud brick houses without running water or electricity. Even when they had lost family members through war. Even when living in orphanages without books or toys.

I can’t help but think of these kids when I reread the words, “Whoever humbles himself like this child is the greatest in the Kingdom of Heaven”.

I write this in light of the deaths of 5 aid workers killed recently in Afghanistan. It’s easy to become angry and try and lay blame. But instead I try and remember those words. To try and change and become more like those children. They do not worry themselves with hatred or revenge, religious or racial differences, or trying to accumulate wealth or power. They delight in simple pleasures and their faces light up at the sight of a stranger. Surely the Kingdom of Heaven does belong to such as these.