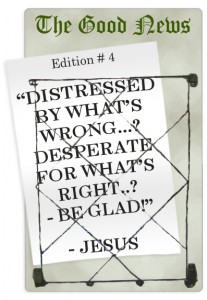 How can they be comforted?

The values of the Kingdom of God are upside down compared to the values of the world. The poor are really rich, the sorrowful really happy, the meek will inherit the earth.

That is the strange message of the itinerant preacher from Galilee named Jesus, the most unusual of the travelling Jewish prophets of his time.

He gives an assurance, for example, to those who mourn that ‘they will be comforted’. What are people mourning about? The obvious thing is they have lost an elderly mother, or a sister through breast cancer, or a lifelong friend in a car accident.

But the preacher hints at something deeper. There are those who mourn over the state of the world – government inducing a state of terror into their citizens, people locking their children away for fear of a predator waiting for them, body-frisking at airports and even going into public buildings, a sense of danger everywhere. Freedom of movement is gone – that’s something to mourn over.

The state of the world – violence seems to be endemic – or is it that the world’s fastest communications era brings it right into our homes by television, when previously we heard about it long afterwards, or never heard at all? We mourn over lost peace.

Some people, working with refugees, mourn for their lost opportunities. Children growing up in the confines of a refugee camp on the Thai-Burma border; orphans from the genocide in Rwanda with no mother or father; children forced into war in Uganda or forced into making carpets in Nepal. Lost opportunities.

How, I ask the preacher, can these people be comforted?

For when the preacher Jesus left the earth, he said to his followers he would not leave them ‘comfortless’ but give them his spirit. With that spirit within, what comfort can we not bring to others who mourn? So, the circle is complete: it begins and ends with us.

Alan Nichols is a journalist, writer, Anglican Minister and consultant on Ethics and Social policy, including health care and refugees.