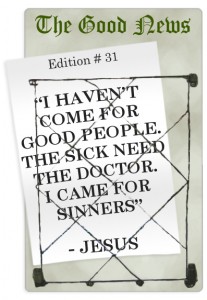 Matthew 9:9
“As Jesus went on from there, he saw a man named Matthew sitting at the tax collector’s booth. “Follow me.” He told him, and Matthew got up and followed him.
10 While Jesus was having dinner at Matthew’s house, many tax collectors and “sinners” came and ate with him and his disciples.
11 When the Pharisees saw this, they asked his disciples, “Why does your teacher eat with tax collectors and “sinners?”
12 On hearing this, Jesus said, “It is not the healthy who need a physician, but the sick.
13 But go and learn what this means: ‘I desire mercy and not sacrifice.’ For I have not come to call the righteous, but sinners.”

I was in high security unit of a prison yesterday, chatting with a friend about helping people. He said “You would help everyone, wouldn’t you?” I said “Yes, but to some people it seems that when I help a criminal, I am condoning their crime, or at least seeing their crime and the victims of their crime as not important”. My friend admitted he saw it that way.

When Jesus was on earth he was given the title “friend of sinners.” Did the other people see Jesus as a sinner because he ate with the sinners and was their friend?

Last week I officiated at a friend’s funeral. Preparing for the funeral service, two memories came back to me.

In the prison, he had participated in a Prison Fellowship program. He said that life for him was going on as it had been for a long time. He had status in the prison system. He had a big reputation; both prisoners and prison officers feared him. Then he met some new people who had accepted him and cared for him. They were not intimidated and didn’t try to manipulate him. They just offered him gentle respect and care. When asked, they were happy to explain why they were Christians. My friend said to me at that time, “You people have “stuffed up” my life; you have complicated it in ways that you can’t understand.”

Another time, he told me that his life had been like a huge rubbish dump and he was travelling through it. Everything was broken and smashed; the air was foul with the smell of rotting food. “Then in that place and journey it was like I smelt the beautiful perfume of a rose. I had to find that rose.”

My friend’s spiritual journey had started and I know that God’s grace reaches more than half way when we reach out.

As Jesus said “For I have not come to call the righteous, but sinners.”

Kevin Maddock has been a prison visitor, and pastor with Prison Fellowship Australia.