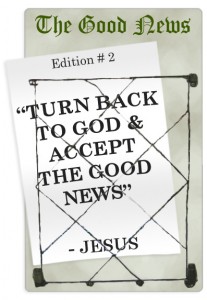 Matthew 4:17
From that time on, Jesus began to preach, “Repent, for the kingdom of heaven is near!”

Mark 1:14
After John was put in prison, Jesus went into Galilee, proclaiming the good news of God.

15 “The time has come,” he said. “The kingdom of God is near! Repent, and believe the good news!”

Jesus announced God’s good news! (“Gospel” means good news.) A message of acceptance, forgiveness, renewal, and reconciliation; a message of hope that even in the worst situation, God offers us something better. The chance of a new start, and the power to change.

The starting point for this good news is a U-turn! Repentance is a turning from what is wrong, and turning back to God. – “turn away from your sins.” Walk into the light!

Jesus told the story of “the prodigal son”. This son claimed his inheritance while his father was still alive. He took all the money, turned his back on his father, traveled to a place a long way from home, and spent the lot! Eventually, in desperation, he came to his senses. He said, ‘I will go back to my Father, and say to him, “Father I have sinned…” The good news is that the father never gave up on his rebellious son, and welcomed him home. (Luke 15:11-32)