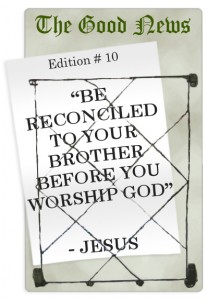 Matthew 5:21
“You have heard that it was said to the people long ago, ‘Do not murder,’ and ‘Anyone who murders will be subject to judgment.’
22 But I tell you that anyone who is angry with his brother will be subject to judgment. Again, anyone who says to a brother or sister, ‘Raca,’ is answerable to the court. And anyone who says, ‘You fool!’ will be in danger of the fire of hell.
23 “Therefore, if you are offering your gift at the altar and there remember that your brother has something against you,
24 leave your gift there in front of the altar. First go and be reconciled to your brother; then come and offer your gift.

Breaking News; “Speaking today from the mount near his home, Jesus Christ announced a shock new and higher replacement to the penalty for homicide. From today, mere anger felt about a brother or a sister or a neighbor, in the absence of a personal approach to discuss the cause of the anger, will earn his followers Christ’s condemnation. Such hate and anger will place a requirement on his followers that, attending a place of worship and remembering a dispute that might otherwise fester and destroy brotherly love, they should go and speak with their brother frankly and, clearing the air, be reconciled to him.

In a further surprising pronouncement, words of abuse to a brother like “raca!” (the Aramaic word, meaning “worthless”) and “fool”, which give evidence of hate and anger, earn special penalty.

(It is not immediately clear to your correspondent why the apparently lesser penalty of being “in danger of the council” should apply to one term of abuse, while hell-fire may be exacted for the second. It is however quite clear that this new standard is in line with the requirements for Christ’s kingdom which turns on its head the  old law’s tolerance of retaliation, famously expressed as “an eye for an eye and a tooth for a tooth”.)

Christ’s law is therefore a deeper and more inward requirement than the previous standard.”

Neil Bell taught in a remote indigenous community west of Alice Springs. He was elected to the Northern Territory Legislative Assembly as the labor member for MacDonnell.